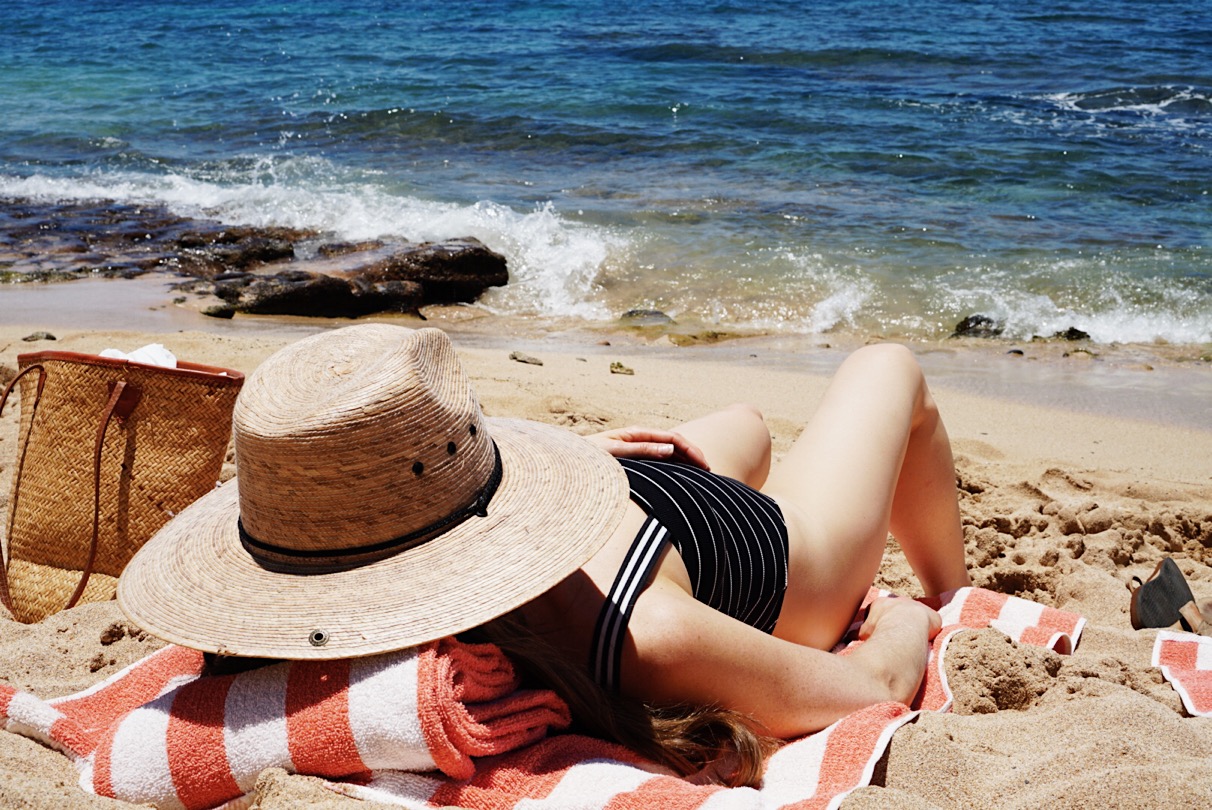 Last month we got spend a long weekend in Maui with family and friends. Up until then, my experience of Hawaii had been a retreat on an off the grid farm in Maui in 2011 and Kona last year while the volcano was erupting…I wasn’t completely sold. After several days of very little agenda, crystal clear water, glorious blue skies and an abundant sunshine, it’s safe to say that I stand corrected.

We stayed in a beautiful condo at the Montage on the Northeast side of the island in Kapalua that had a balcony overlooking the beach. Despite there being a plethora of things to do, my goal was to not over-schedule myself and do as little as possible outside of the group activities that we had planned ahead of time. Something that is still somewhat foreign to me, but I’m slowly getting better at.

I was happy to find out that there is a Whole Foods right by the airport so we picked up a a bunch of breakfast and snack food for the week. Green smoothie ingredients, {there was a Vitamix at the condo!}, lots-o-papaya, rolled oats for oatmeal, COYO coconut yogurt, Purely Elizabeth Granola, almond butter and vegetables and hummus for snacking. All of the essentials for lounging in the sun and doing nothing.

Thanks to working in a digital field, Chris and I have the luxury of being able to work remote every now and then. If we hadn’t flown in so late on Wednesday, we would have taken the day off and joined the rest of the group Thursday morning to snorkel and scuba dive. Instead, we spent the day working by the pool and enjoying the warm sunshine.

Thursday night the whole group had dinner at Merriman’s in Kapalua {literally a 5 minute walk from where we were staying}. The first time I went to Merriman’s was in Wimea when we were in Kona last year for a friends wedding and it exceeded any expectations that I had. They are a farm-to-table restaurant with a strong commitment to local and seasonal ingredients. A little pricey in the grand scheme of things, but well worth it in my mind. Everything is bursting with flavor, including their Mai Tai’s {the lilikoi foam is a game changer}, and either made in house or sourced well. They have five locations on various islands – definitely a must visit if you’re going to Hawaii.

The best part of this trip was having no agenda outside of a few activities. While the boys played golf every morning, I spent each morning waking up without an alarm clock {such a luxury} and getting in a morning workout at the gym. For non-golfers on the trip, we spent the bulk of the day lounging by the pool. It. Was. Glorious.

That afternoon we headed over to The Whaler’s Village to take a sunset catamaran {aka booze cruise} with Sea Maui. While we were killing time before boarding the boat, I stumbled upon a great little health food spot called Choice Health. They had a great selection of cold-pressed juices, smoothies, and vegan soups, salads and wraps. Highly recommend it if you’re in the area or looking for a healthy snack.

I was pleasantly surprised by the catamaran. I was expecting an overcrowded boat with crappy alcohol, terrible music and an overly talkative crew, but it was the exact opposite. The crew was super laid back, the drinks weren’t too bad, and there was plenty of room to move around and be comfortable. It was the perfect kind of happy hour. We even got to see wales!

Dinner was at Monkeypod, which is a more causal sister spot to Merriman’s with a more sports bar-brewery approach to the menu, but maintaining the same farm-to-table philosophies as Merriman’s. I highly recommend the fresh-caught fish tacos in the homemade corn tortillas.

Our last day started out like the others with a morning workout and some pool time while the boys went golfing. I drastically underestimated the high noon sun and got a little burned. Note to self, when you’re that far south, keep the SPF 50 on hand.

Later that day we ventured north of where we were staying to check out the blow hole and the heart-shaped rock. At Nakalele Point there is a blow hole made from dried lava that turns into a geyser when the waves crash in. You have to hike down it, but once you are down there it’s pretty cool. I’ll admit, I wasn’t sold on it when we got there, but once you hike down to the water and walk around the dried lava, it’s pretty cool. The perfect afternoon excursion.

That night, we capped off our vacation with a big family dinner at the condo: ahi fish tacos with a ton of roasted vegetables {asparagus, zucchini, yellow squash, guacamole and pineapple salsa. At this point, my heart is filled with so much gratitude and I’m 100% sold on “do-nothing” vacations. Next step, figure out how to take more of them.