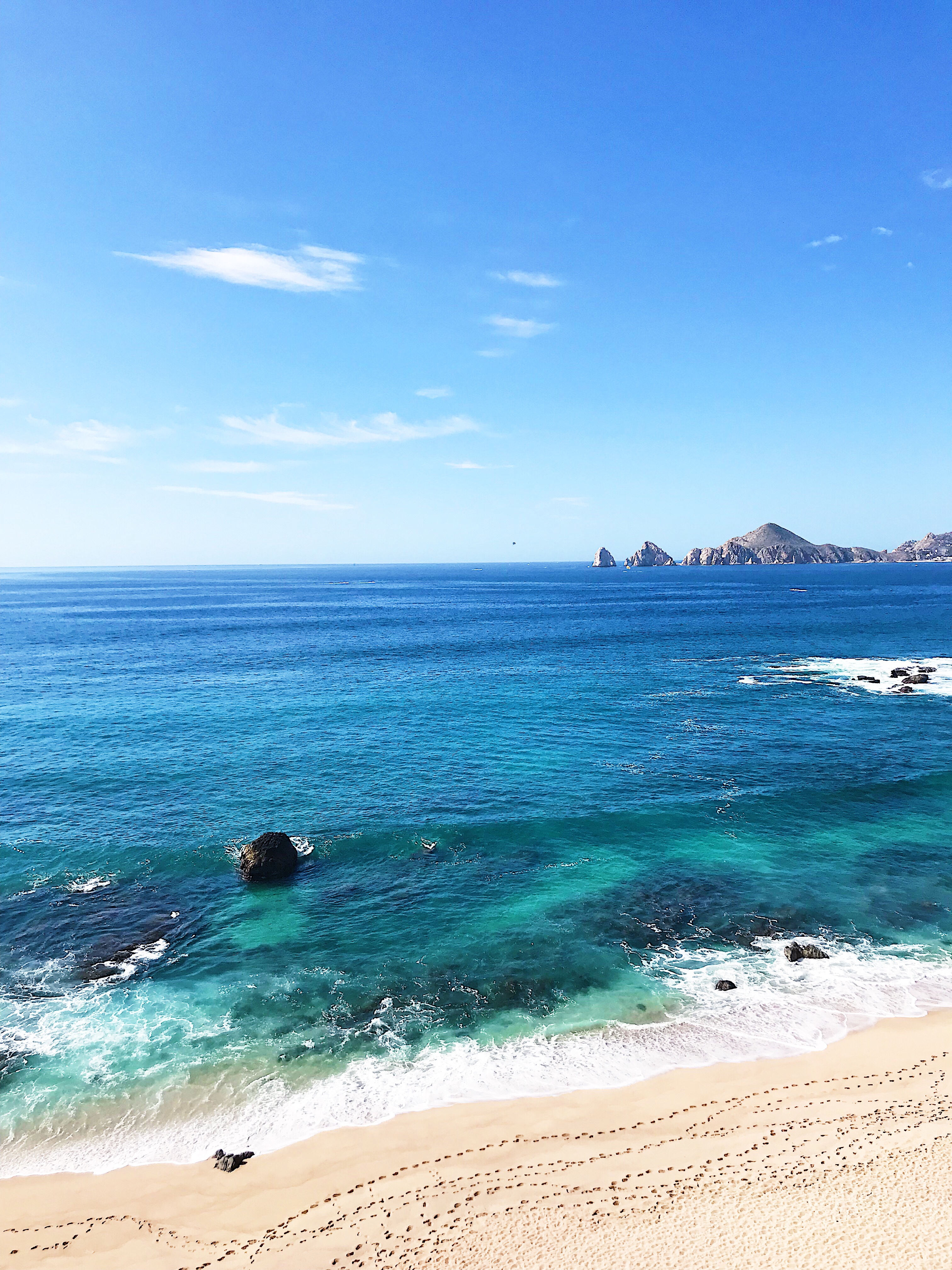 I’ve finally recovered from a less than graceful ending (thank you infamous “Mexico bug”) to my trip to Cabo for my 30th birthday, and thankfully lived to tell the story. Instead of throwing a birthday bash for my big 3-0, I decided to escape the doom and gloom rain in Portland and head to sunny Mexico for some much needed vitamin D and R&R. Since Alaska Airlines fly’s direct from PDX to SJC and Cabo met all of my top two requirements of beach and sunshine, it seemed like the perfect spot to celebrate another year on earth.

The majority of the trip was spent not having an agenda, sleeping without an alarm clock, lounging by the pool, enjoying the sunshine, and eating. We booked a few activities and dinners ahead of time and reserved time to explore Cabo and San Jose, however the rest of the time was pure relaxation. IT. WAS. AMAZING. If you’ve never taken a vacation where you just relax and unplug, then I rightly recommend it. Trust me, your soul needs it.

In general, Cabo San Lucas felt a bit like Las Vegas to me. Albeit, we did not spend too much time in downtown Cabo aside from walking to get tacos at Gardenia’s after our sailing trip, but I can safely say that it was not my favorite part of the trip. I personally prefer San Jose del Cabo to Cabo. It’s about 45 minutes east of Cabo and is much quieter town with an artsy feel. Don’t get me wrong, you will still get hustled by shop owners to check out their gallery, but it’s cleaner, less commercial and more quaint than Cabo San Lucas. I even stumbled across a vegan cafe in San Jose del Cabo!

Below is a guide to a few of my favorite places in Cabo and San Jose. Enjoy!

This place is UN-REAL.  I think it’s the nicest hotel I’ve ever stayed in. Apparently it’s a 5-star hotel, which did not occur to me when we found it on Alaska Airline’s website when we were searching for vacation bundles, but we got a really good deal on it.

It’s located about 15 minutes east of downtown Cabo and 40 minutes west of San Jose Del Cabo. The hotel has it’s own private beach and amazing infinity pool with a picturesque view of El Arco, and some of the best hotel food I’ve ever had. They have two restaurants and four bars, one of which is a rooftop bar that overlooks Cabo and the ocean. They were very accommodating with dietary restrictions and I was able to eat diary and gluten-free at every restaurant.

We stayed in their basic room, which is a deluxe king, and it was far from anything basic. All of the rooms are ocean view and come with a private balcony, dual-head shower, and the kind of bathtub that you with you had in your house.

We decided to treat ourselves to a deep tissue massages on our second day. After some lack luster couples massages in Croatia last year, we had low expectations, but we were pleasantly surprised.  When you book a spa service you get access to the spa for the whole day which has a eucalyptus steam room, dry sauna, and several soaking tubs overlooking the ocean.  I highly recommend the steam shower with a cold plunge after. It’s invigorating!

One of the downsides of The Cape is that everything cost what it would cost if you were in The States. Everything outside of the hotel was very affordable, however at the hotel we still found ourselves paying $25+ for an entree. Also, it’s not easy to walk places. Just to get to the federal highway 1, the main road into Cabo, you would have to walk 10 minutes up a steep hill. Lastly, the gym is tiny, it was always crowded in the morning. Given the kind of clientele that the hotel attracts, I would think that it would have been a bit larger with more cardio equipment.

The chef of this restaurant is Enrique Olvera, who I had seen on Netfix’s Chef’s Table a while back, has a strong commitment to sourcing fresh local ingredients. The menu is seafood forward with an eclectic mix of Mexican, Peruvian, and Japanese dishes that are rooted in Baja flavors.  We ate there two nights, one of which was my birthday dinner.  We did the tasting both nights so that we could try as many dishes as we could.  I highly suggest the catch of the day, the octopus skewers and the roasted sweet potato and almond “mole” (completely vegan), and the suckling pig steamed buns (they served them in their house mad corn tortilla’s for me so that the dish was gluten-free).

I knew this place would be good when I found out that it had been in business for more than 30 years and they use family recipes. We stopped in here after or sailing excursion on Saturday to “grab a taco” and ended up wording several more after we tried it. The restaurant is very unassuming, but the tacos are simply delicious.  The grilled shrimp was by the best taco.

I’ll be honest, this is the real reason I wanted to go to Cabo. I had seen several articles about Flora Farms and have been dying to try it ever since. #willtravelforfood

It’s a bit suspicious getting to the farm. It’s outside of San Jose del Cabo and you have to drive up a winding dirt road in the middle of the desert to get there, but once you arrive it’s totally worth it.  Flora Farms is a true farm-to-table establishment. The farm itself is absolutely beautiful.  It feels like you’ve been dropped in Narnia with all of the lush vegetation and colorful flowers.  They have several boutiques, their own brewery, a wine bar, a spa, their own spa shop that sells bath and body products made using ingredients from the farm, a restaurant, a grocery store and a workshop space. They even have houses that you can buy!  We picked up a few mezcal glasses and some Mexican chocolate at the shop that only sells products from Mexico.

The dinner was as expected, amazing. Everything on the menu was sourced from the farm and/or made in house. They had two menus, one that was more vegetable forward and highlighted the ingredients from the farm and the other menu was more meat centric. All of the meat comes from a 150-acre ranch where animals are raised hormone and antibiotic free. By this time in the trip we were both craving vegetables so we split a vegetable board and a salad from the garden.  I got the vegetable lasagna that was vegan and gluten-free and C got a pork pappardelle dish that smelled like it came fresh out of an Italian kitchen.  They even tossed in a slice of their homemade carrot cake (not dairy or gluten free, but I tried a bite and it was delicious).

I almost wish that our hotel was closer to Flora Farms because I would have loved to try brunch…and lunch…and maybe another dinner.

Of course I find a vegan and gluten-free cafe in Cabo…I was SO excited to find this. Apparently it was their first day. We didn’t get a lot because we were eating dinner in a few hours, but we did share a kale smoothie and turmeric shots. After eating very rich food for several days we relished in the simplicity of fruits and vegetables.  Best part is that it’s very economical—smoothies were under $10—pause for dramatic effect.  The food looked promising, I was eyeing the falafels and waffles. If you’re in Cabo and are in need of health food, then this is your place.

This was a recommendation from a co-worker and I’m so glad that I took her advice. We paid $238 for the both of us and got 4 hours of sailing/snorkling/whale watching/soaking up sun and included lunch and an open-bar.  They picked us up from our hotel, which was complimentary, and would have dropped us off as well if we hadn’t decided to get dinner in Cabo. The guide, captain and photographer were hysterical and so much fun. We motored out to Santa Maria bay where we had an hour to swim, snorkel, lounge on the boat and had lunch before sailing back to the harbor.  I’ll be honest, I didn’t eat too much of the lunch mostly because I was nervous about getting a bug, which is ironic considering I got something on the last day of our trip, but I did try everything and it was surprisingly good.

I have never been sailing so I did not know what to expect but it was so much fun—very soothing and freeing in a way. Note to self the boat tilts when you sail…like a lot, also, now I know why jackets are wind proof. I think the best part of the sailing was seeing a humpback whale breach 100 yards away from us. Those guys are HUGE! 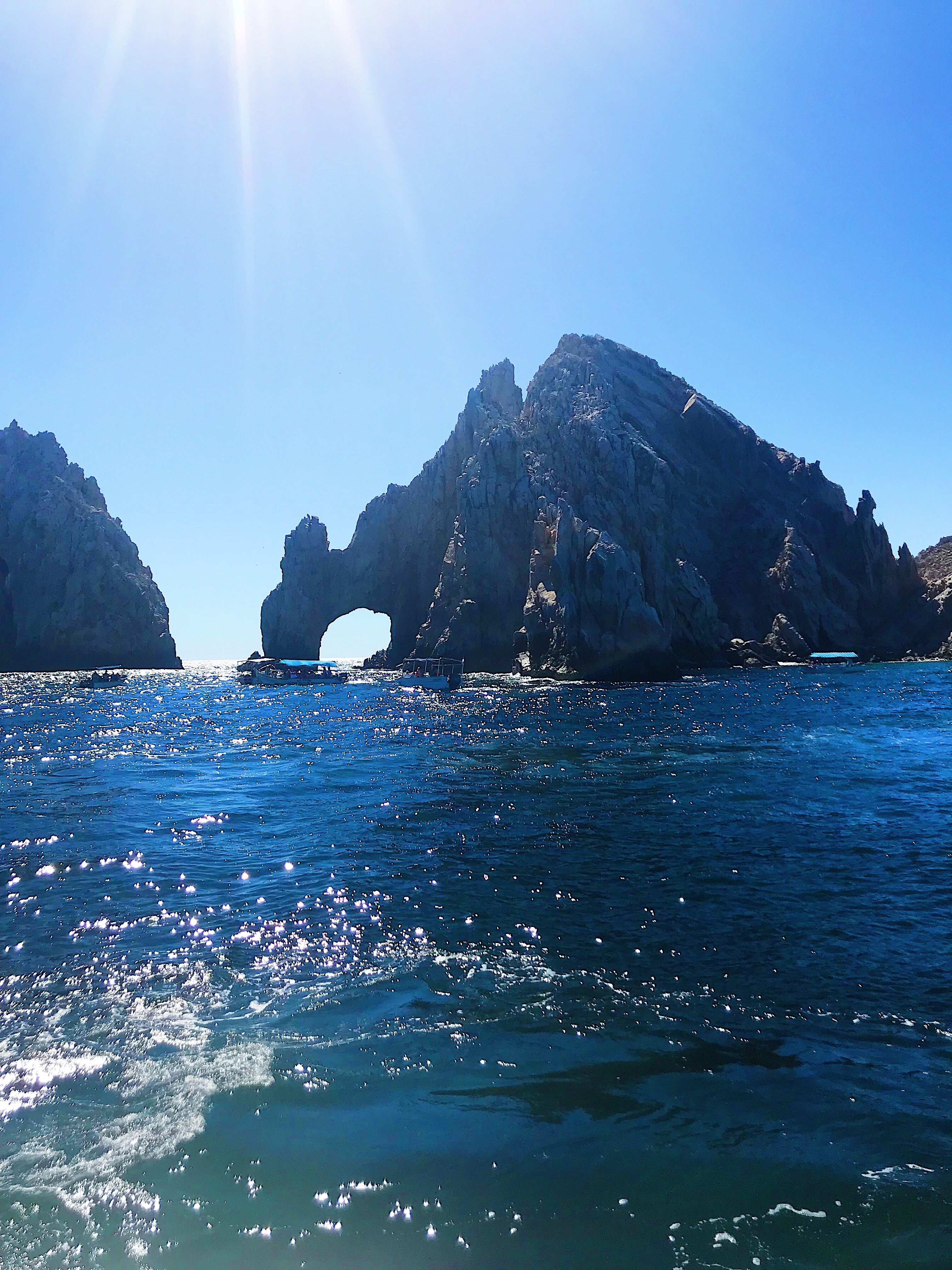 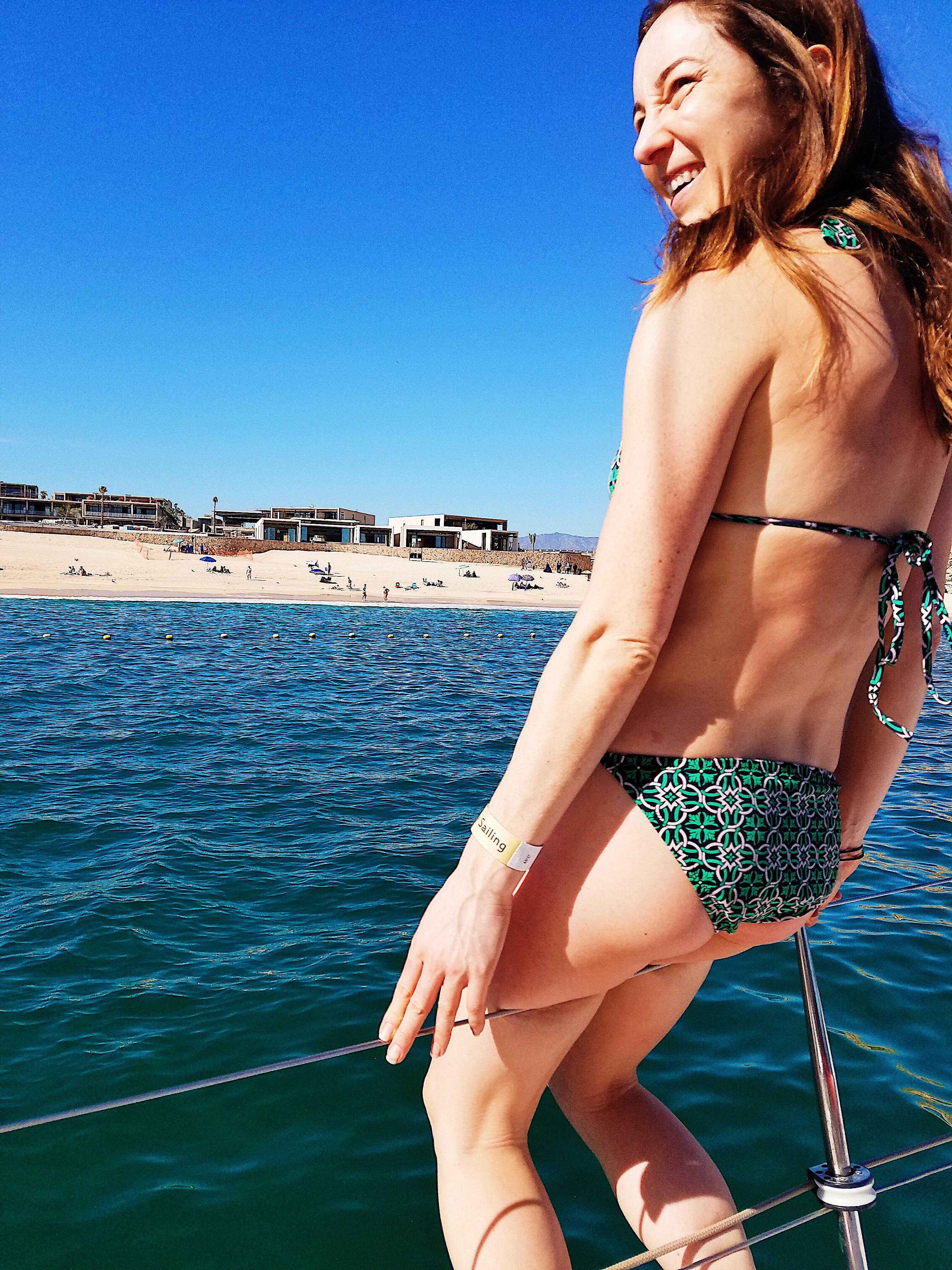 Chic, minimalist shop with beautiful art, home decor and furniture.  I was very captivated by the line of perfume they had called ARQUISTE. The sales associate proceeded to tell me that the line was create by an architect specializing in historic preservation. The intention of each unique scent is to transport one to that exact moment in time. All of the scents are quiet beautiful. My favorites were Infanta en flor, Fleur de Luis, and The Architects Club. 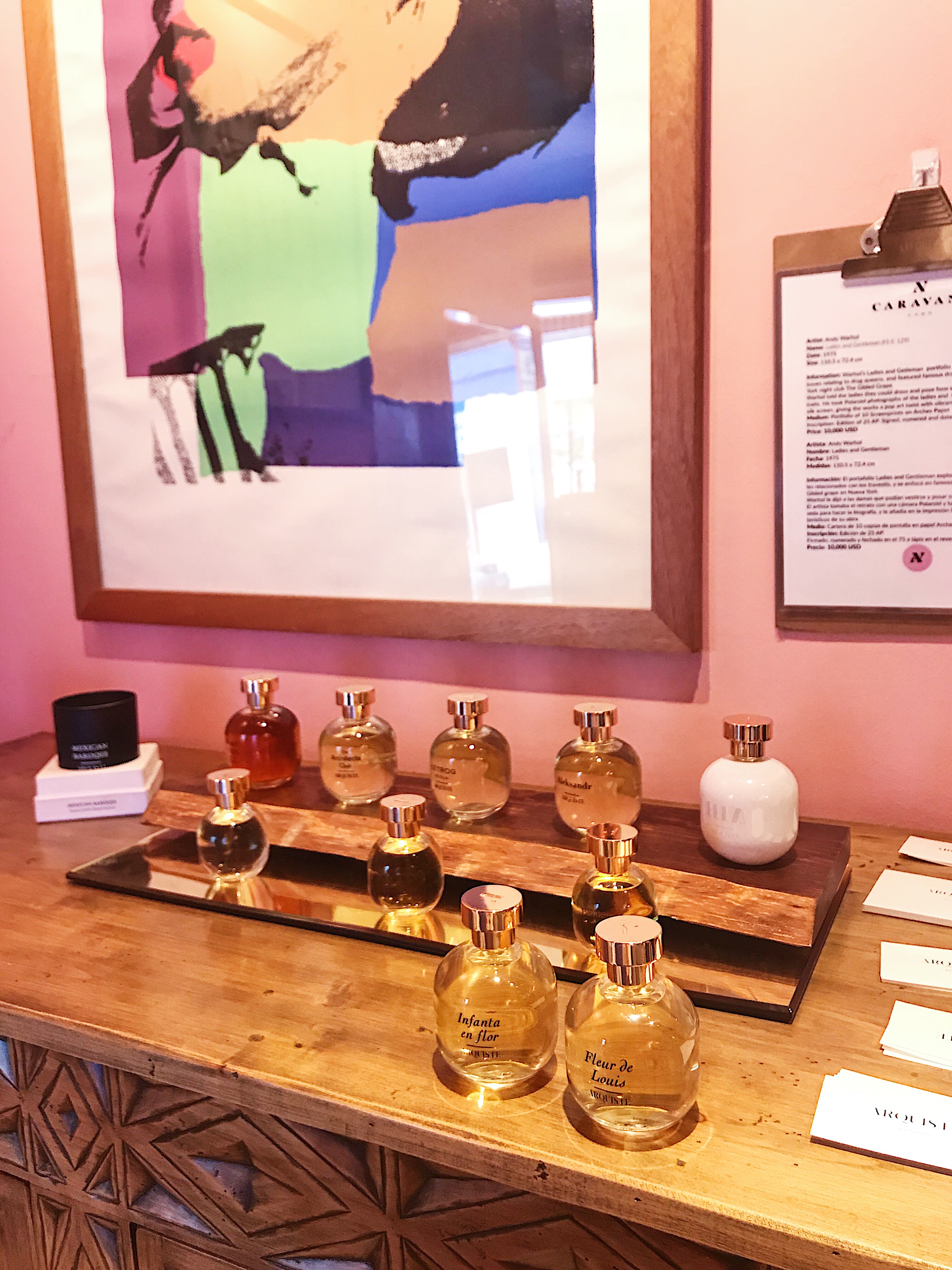 A mix of international and local boutiques like James Perse, Self Edge, and Eduardo Sanchez. They also have a spa shop, a wine bar, and a microbrewery. Inside the restaurant is little grocery store where you can buy fresh produce and foods made from the farm like ice cream, cookies, sausages, and cheese.