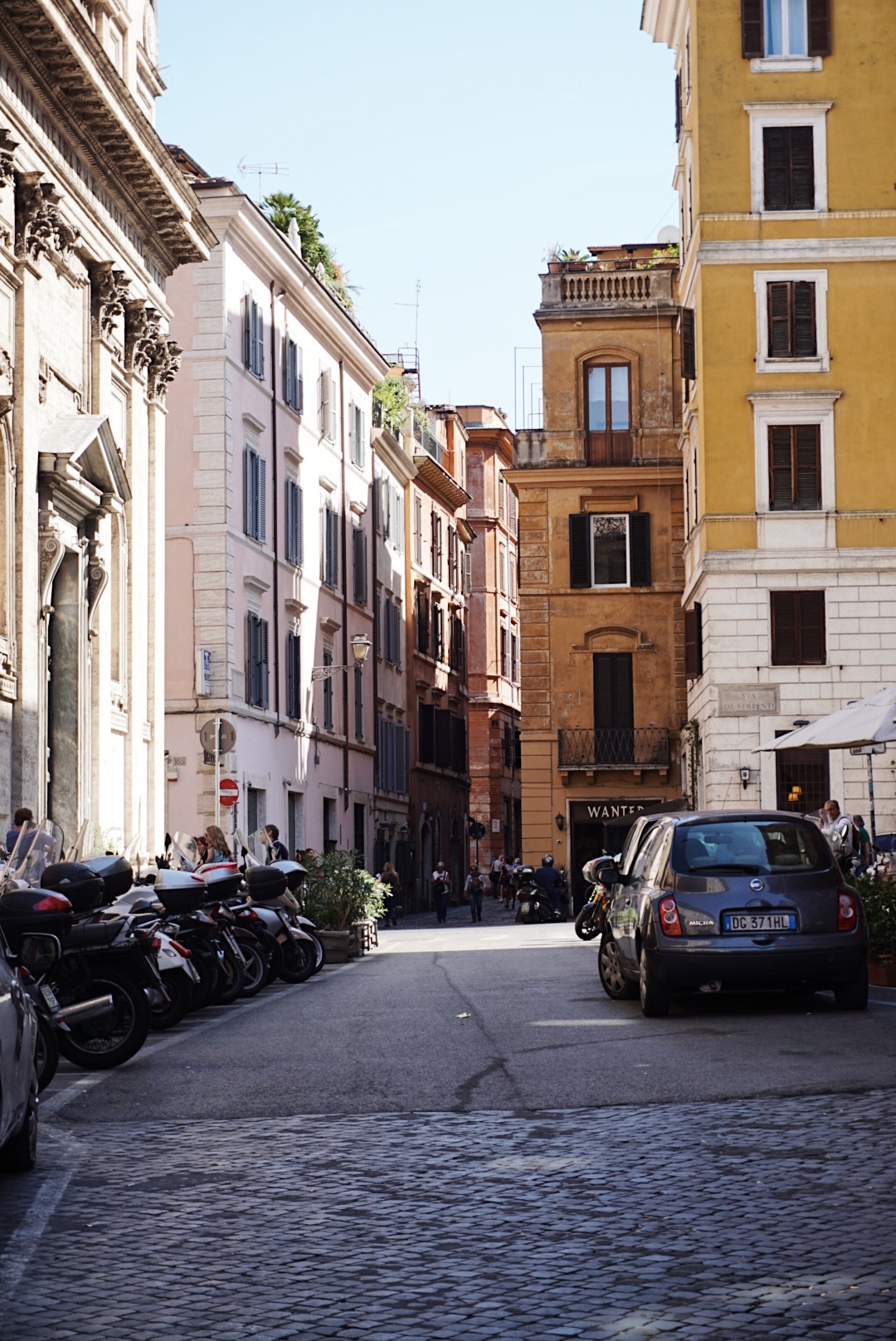 I love the winding streets, the constant buzz of traffic and people, and above all, the architecture. There’s a distant nostalgia that comes when thousands of years of history and life that came before you are literally at your finger tips and under your feet.

Our pit stop in Rome prior to heading down to Ischia was very similar to the first time that I was there – short, jam-packed and filled with many many…many steps {20,000+ to be exact}.  After 24 hours of travel and only 4 hours of sleep we were deliriously exhausted by the time that we arrived at our hotel in the evening. We were also starving so we took ourselves on a long walk and grabbed dinner at Rifugio Romano.

Ironically enough, half of the family behind the restaurant is vegan so their menu is half vegan, half non-vegan.  We tried a vegan pizza and vegan pasta {we should have tried one vegan, one non-vegan entree so that we could compare} and each had a large glass of red wine. I wouldn’t necessarily go out of my way to go here again; coming from the West Coast, I’m spoiled with gourmet vegan food. That being said, if you are a true vegan then this could be a great option for you.

After that it was off for some much needed sleep, and on to day two.

We started our only full day in Rome grabbing a juice at Re Bio before exploring the Colosseum. If you are going into the Colosseum, I highly recommend purchasing tickets in advance. {I’m sure most people reading this are like duh, yes Sarah}. It took us an hour just to get through security and get tickets. It was however, totally worth it. Usually when I go to museums, I barely read the signs describing each piece. At the Colosseum, I eagerly hopped to each sign to read about the construction, excavation and history.

We grabbed a quick lunch at Pronto Takeaway down the street from the Colosseum and topped it off with gelato from Fatamorgana.  They don’t use any industrial bases or processed pastes, thickeners, stabilizers, colorants, or artificial flavors; only water, milk, fruits, spices, herbs, nuts, chocolate, eggs, honey and sugar.  They have vegan, dairy free and nut free gelato and all of their stuff {including the cones} are gluten-free.

One review I read was that their gelato was not as creamy as others but I disagree. I tasted three flavors {the very tall Italian man behind the counter was not pleased with my indecision} both vegan and non-vegan before settling on good ole full-dairy pistachio {when in Rome} and all of them were very creamy and flavorful.

We spent the afternoon roaming {see what I did there} around the Forum, and the rest of the city. This was Chris’s first time to Rome so we made a pit stop at the Trevi Fountain, the Pantheon, and Piazza Novanna for a mediocre aperol spritz {we knew what we were getting into}.

After a quick change, and a much needed shower, we ventured back out for dinner. On our way to dinner we stopped at Chez Dede, a concept store started by two local creative directors, one of which is a rather talented illustrator. I highly recommend this place – it’s beautifully curated with a mix of their own designs and other local designers artists. I was half tempted to buy a copy of their fashion journal but thought better of myself when I remembered how little room I had in my luggage…

Dinner was at Pierluigi, a true sea-to-table restaurant near Campo di Fiore. I cannot say enough good things about this place. The service was impeccable, the food was delicious, and the wine was tantalizing. They have over 1500 different wines to choose from all of which I’m sure are just as delicious as the prosseco and red wine that we had.

We started with two oysters each – one French, one Irish – followed by an octopus carpaccio that was surprisingly delicious. We ordered a tagliatelle pasta with lobster and sea bass baked in sea salt not knowing that we were buying {and being served} the whole lobster and whole fish {whoops}. Needless to say we had leftovers, but it was so worth it. Maybe it was because it was my first pasta in Italy, but I’m still having dreams about that lobster pasta.

We {mostly Chris} topped it off with a homemade tiramisu. All I have to say is that my new mission is to master a vegan, or paleo, version of this that is just as light and fluffy. Just do yourself a favor and go there, you won’t be disappointed.

We only had two nights in Rome. Just enough time to take in some sights, recover from a long travel day, and of course eat. Next stop, Ischia!